My review of the whole series:

Although, I never saw the tv show/reality Bachelor, I am familiar with the concept of it: a man has numerous gals to choose from as his future wife and in each episode he spends some time with them and if he doesn't like them in the end, he gives them a peck on the cheek along with a rose and off they go (at least that's how I think it is more or less). Well, that's how it goes on the book at least.
The story
In this dystopian universe, people are assigned to a number: the higher the number the better. If you are an eight for instance, there is no way you would marry a two or even a five. In this way rich people stay rich and poor stay poor and miserable. In a way to boost the poor peoples' moral, the government (aka the king) allows a competition to take place called "The Selection". Girls from all the castes can apply but only a handful of them gets picked to come to the palace and charm the prince and earn the desirable title of being 'a One'. But things aren't of course stable with the rich and the poor (are they ever?) and a revolution is too imminent.
The characters
Meet Maxon:

(yep in my head he does look like zac efron)
he is the spoiled (?) heir to the throne and has to choose a wife through a potential pool of girls that got 'randomly' picked from all the castes (hence the hunger games reference; instead of districts we get castes).
Now meet America:

(not the country! duhhh..) she might be poor but she is fierce, independent and didn't want to apply for the selection in the first place, as she is in love with another (note here: this is not how she was perceived by me). However, she is charmed by the prince (why wouldn't she? He is the prince) and wants him (but it takes her a bit to figure it out)
Of course, there are notable characters as: America's rivals (some bitchy, some nice) and of course America's other crush, creating yet another useless triangle for readers to argue about.The trilogy
In the first book, "The Selection" begins; we meet all the girls and get a taste of the world Siera Cass built.
In the second book, the battle for Maxon's heart continues with "the Elite";where some of the girls made it to the semifinals.
Finally, in the third book we get to see who Maxon is going to pick as his "One".
My thoughts on the book
The setting of these series isn't something extremely well written or even original. I didn't mind though as I enjoyed reading it for the most part and I really liked Maxon. My problem was with America as I found her whiny. I would have found the whole story a lot more appealing if America was a rebel trying to infiltrate the selection and win in order to kill the royals.
But oh well it was okay like that too (I guess).
The sequel and the short companion stories
With this story we also get two more books, short ones, that tell the story from America's crush point of view and another one telling the same story as the main books but from the queen's pov. I didn't really like them to be honest as they didn't add anything to the story.
There is a new book that came out called "The Heir" with the same scenario, but instead of a prince we have a princess: Maxon and America's daughter.

this is not something I'm at all interested to read.
Final notes
On a final note , I should mention the gorgeous covers these stories have. I mean look at that: 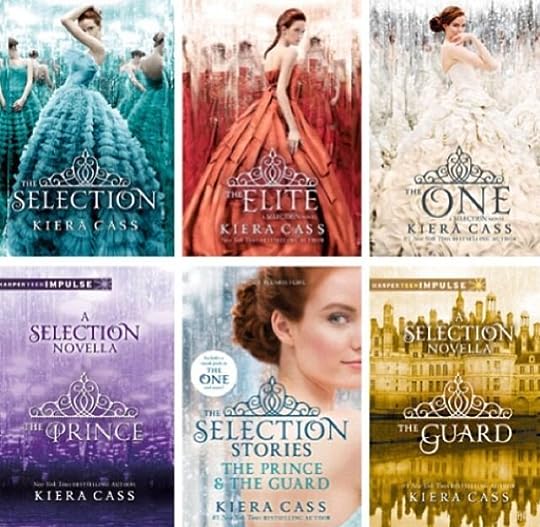 Of course it's true what they say: 'don't judge a book from its cover'; if it wasn't, then this story would have been exceptional.